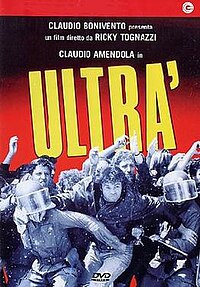 Ultra is a 1991 Italian drama film directed by Ricky Tognazzi. It was entered into the 41st Berlin International Film Festival where Tognazzi won the Silver Bear for Best Director.

A group of ultras of Rome leaves to Turin, where the guys have to play the game of Juve-Roma. The Romans are greeted with stones by enemies, and the leader of the extremist group: Er Prince, orders his followers to stab the fans of Juventus. The two opposing factions are arrested and are forced to tell the facts to the superintendent. Meanwhile, in the stadium of Juventus, the remaining ultras are locked in a brawl between their enemies with exaggerated stabbings and stones.