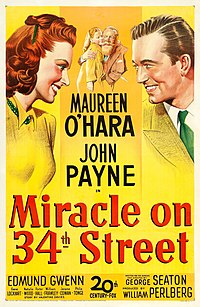 Miracle on 34th Street (initially released as The Big Heart in the United Kingdom) is a 1947 American Christmas comedy-drama film released by 20th Century Fox, written and directed by George Seaton and based on a story by Valentine Davies. It stars Maureen O'Hara, John Payne, Natalie Wood, and Edmund Gwenn. The story takes place between Thanksgiving Day and Christmas Day in New York City, and focuses on the effect of a department store Santa Claus who claims to be the real Santa. The film has become a perennial Christmas favorite.

Kris Kringle (Edmund Gwenn) is indignant to find that the man (Percy Helton) assigned to play Santa in the annual Macy's Thanksgiving Day Parade is intoxicated. When he complains to event director Doris Walker (Maureen O'Hara), she persuades Kris to take his place. He does so well he is hired to play Santa at Macy's flagship New York City store on 34th Street.