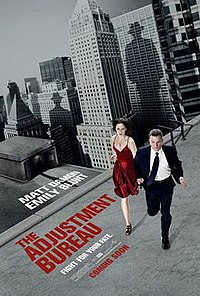 The Adjustment Bureau is a 2011 American science fiction romantic thriller film written and directed by George Nolfi, based on the 1954 Philip K. Dick short story "Adjustment Team". Starring Matt Damon, Emily Blunt, Anthony Mackie, John Slattery, and Terence Stamp, the film tells the story of a United States congressman who discovers that what appear to be chance events in his life are controlled by a mysterious, powerful group. After an event not planned by these controllers occurs – a romantic encounter with a dancer – he struggles against their manipulation despite their promise of a great future for him.

In 2006, Brooklyn Congressman David Norris unsuccessfully runs for the United States Senate. While rehearsing his concession speech, David meets Elise Sellas. They share a passionate kiss, though he does not get her name. Inspired by her, David delivers an unusually candid speech that is well-received, making him a favorite for the 2010 race.