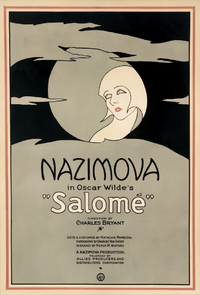 Salomé is a 1923 silent film directed by Charles Bryant and starring Alla Nazimova. It is an adaptation of the 1891 Oscar Wilde play of the same name. The play itself is a loose retelling of the biblical story of King Herod and his execution of John the Baptist (here, as in Wilde's play, called Jokaanan) at the request of Herod's stepdaughter, Salomé, whom he lusts after.

As described in a film magazine, during a banquet at Herod's palace, the Tetrarch (Lewis) pays too much attention to his stepdaughter Salomé (Nazimova), angering his wife Herodias (Dione). Salomé goes out into the courtyard adjoining the banquet hall and induces the soldier on guard to let her see Jokaanan (De Brulier), who is then brought up from the prison below. Salomé shows her love for the Prophet and, when he ignores her attentions, declares that she will kiss him. The price is a dance before Herod, who promises her that he will accede to any demand for the dance. Salomé asks for and gets the Prophet's head and kisses it. Herod then turns upon her and orders her killed.