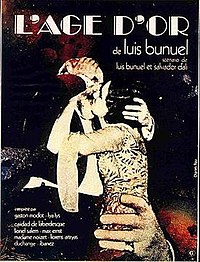 L'Age d'Or (, ), commonly translated as The Golden Age or Age of Gold, is a 1930 French surrealist satirical comedy film directed by Luis Buñuel about the insanities of modern life, the hypocrisy of the sexual mores of bourgeois society, and the value system of the Catholic Church. Much of the story is told with title cards like a predominantly silent film. The screenplay is by Buñuel and Salvador Dalí. L'Age d'Or was one of the first sound films made in France, along with Miss Europe and Under the Roofs of Paris.