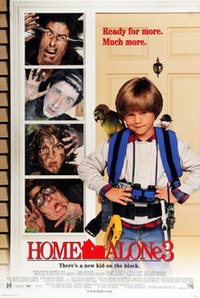 Home Alone 3 is a 1997 American family comedy film written and produced by John Hughes. It is the third film in the Home Alone series and the first not to feature actor Macaulay Culkin and the cast from the previous films, nor director Chris Columbus and composer John Williams. It is also the final film in the Home Alone franchise to receive a theatrical release. The film is directed by Raja Gosnell (in his directorial debut), who served as the editor of both original films. It stars Alex D. Linz as Alex Pruitt, an 8-year-old child prodigy who defends his home from a dangerous band of criminals who work for a North Korean terrorist organization.

Peter Beaupre, Alice Ribbons, Burton Jernigan, and Earl Unger are four internationally wanted spies working for a North Korean terrorist organization. After stealing a $10 million missile-cloaking microchip, the spies put it inside a remote control car to sneak it past security at the airport. However, a woman named Mrs. Hess inadvertently takes the spies' bag containing the car, while returning home to Chicago. The four spies arrive in Chicago and systematically search every house in Hess's suburban neighborhood to find the chip.