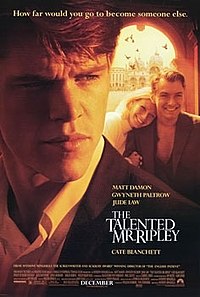 While working at a fancy party as a pianist, Tom Ripley (Matt Damon) is approached by shipping magnate Herbert Greenleaf, who believes that Ripley attended Princeton with his son, Dickie (Jude Law), because Ripley is wearing a borrowed Princeton jacket. Greenleaf gives him a tour of his shipyard and recruits Ripley to travel to Italy to persuade Dickie to return home, offering him a $1000 bonus and all expenses paid. After a first class ocean liner voyage, Ripley pretends to be Dickie in the Italian ship terminal and strikes up a friendship with an American socialite, Meredith Logue (Cate Blanchett).