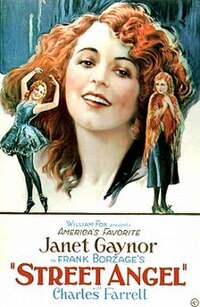 Street Angel is a 1928 American silent drama film with a Movietone soundtrack, directed by Frank Borzage, adapted by Harry H. Caldwell (titles), Katherine Hilliker (titles), Philip Klein, Marion Orth and Henry Roberts Symonds from the play Lady Cristilinda by Monckton Hoffe. As one of the early, transitional sound film releases, it did not include recorded dialogue, but used intertitles along with recorded sound effects and musical selections.

A spirited young woman (Gaynor) tries to prostitute herself and, failing in that, to steal money, to pay for her seriously ill mother's medicine. She is caught in the act and convicted but escapes from her guards, only to find her mother dead. Fleeing the pursuing police, she joins a traveling carnival, where she meets a vagabond painter (Farrell). Though they fall in love, her past will not leave her alone.