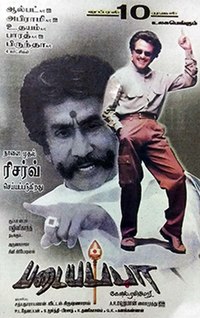 Padayappa is a 1999 Indian Tamil-language drama film, written and directed by K. S. Ravikumar, and featuring Sivaji Ganesan, Rajinikanth, Ramya Krishnan and Soundarya in the lead roles, with Abbas, Lakshmi, Radha Ravi and Nassar in supporting roles. The soundtrack album and background score were composed by A. R. Rahman.

Padayappa is a mechanical engineer who returns to his village after three years to attend his sister's wedding. Padayappa's family have been the richest landlords of their village and chieftains for their region. Padayappa's great grandfather had decreed all Hindu marriages in their region must take place in the Murugan temple, after the chieftain has verbally confirmed the consent from bride and groom. This tradition has been followed for a century and now Padayappa's father is the chieftain. Padayappa's younger sister is engaged to their maternal cousin Suryaprakash. During his stay, he comes across Vasundhara, and falls in love with her. However, shyness and fear of Neelambari whose family employs her and her mother as servants, prevents Vasundhara from initially expressing her feelings. Neelambari is Suryaprakash's spoilt US-returned sister who also loves Padayappa.