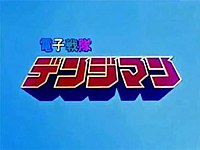 is Toei's fourth entry to its Super Sentai metaseries. It was broadcast from February 2, 1980 to January 31, 1981. The title given to this series for international distribution by Toei is Denziman, Electric Fighters.

3,000 years ago, the Vader Clan, led by Queen Hedrian, devastated the planet Denji. Denji Land, an island from Denji, landed on Earth. In modern times, the computer of Denji Land awoke the Denji Dog IC when it detected the Vader Clan approaching Earth. IC found five young people (who may or may not be descendants of the Denji people) to become the Denjimen in order to defend Earth, the Vader Clan's next target.