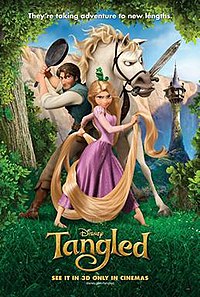 Tangled is a 2010 American 3D computer-animated musical adventure fantasy comedy film produced by Walt Disney Animation Studios and released by Walt Disney Pictures. Loosely based on the German fairy tale Rapunzel in the collection of folk tales published by the Brothers Grimm, it is the 50th Disney animated feature film. The film was directed by Nathan Greno and Byron Howard (in the former's feature directorial debut) and produced by Roy Conli, with a screenplay written by Dan Fogelman. Featuring the voices of Mandy Moore, Zachary Levi, and Donna Murphy, Tangled tells the story of Rapunzel, a lost young princess with magical long blonde hair who yearns to leave her secluded tower. She accepts the aid of an intruder to take her out into the world which she has never seen.

Long ago, a drop of magical sunlight falls from the sky and sprouts a flower with healing powers. Upon discovering it, an old beggar woman named Mother Gothel hides the flower and uses it to stay young for centuries, until royal soldiers from the nearby kingdom of Corona find and uproot it to save their pregnant and ill Queen. The Queen gives birth to a baby princess with long golden hair. While the king and queen are sleeping one evening, Gothel discovers the hair has the same powers as the flower, but turns brown and becomes powerless when cut. She kidnaps the girl, named Rapunzel, and raises her in a hidden tower in the woods, using her hair to stay young.