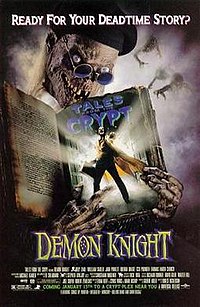 On a desert road in New Mexico, The Collector pursues drifter Frank Brayker. The vehicles crash and Brayker flees. Local drunk Uncle Willy takes him to a decommissioned church converted into a boarding house, where he rents a room and observes the residents: owner Irene, prostitute Cordelia, postal clerk Wally, and a convict on work release named Jeryline. A misogynistic cook named Roach arrives and informs the group about a theft attempt on his employer's car, unaware it was Brayker, and a suspicious Irene calls the sheriff. Sheriff Tupper and his deputy Bob encounter The Collector at the crash site, who convinces them that Brayker is a dangerous thief. At the boarding house, Tupper and Bob learn that Brayker is in possession of an important artifact and that he is carrying false ID. Tupper also gets word from his base that both cars were stolen and he arrests Brayker as well as The Collector. The Collector kills Tupper by punching through his skull. Driven outside by the key-like artifact Brayker possesses, The Collector draws his own blood on the sand and produces a team of demonic creatures.