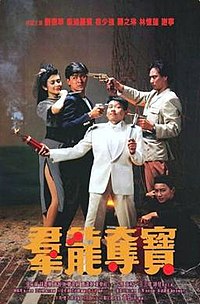 Three Against the World 1988

Three Against the World is a 1988 Hong Kong action film directed by Brandy Yuen and starring Andy Lau as a bounty hunter entrusted by his godfather to protect the priceless Koran and outwit a master thief (Teddy Robin) and friendly rival (Norman Chui) who are looking to pinch the scroll.

Bounty hunter Charlie Chan (Andy Lau) is entrusted by his godfather, Boss Ng (Cheng Gwan-min), to protect a priceless copy of the Koran while transporting it for display in an exhibit to save his godfather's insurance company when the latter agreed to protect it for unscrupulous businessman, Sung Kam-wing (Wong Chi-keung), who is actually scheming to consume Ng's insurance company by hiring master thief Cheuk Fei-fan (Teddy Robin) to steal the Koran. On the other hand, Charlie's friendly rival, sharp shooter Ma Wan-lung (Norman Chui) also wants to steal the Koran for his girlfriend (Charlene Tse), whose grandfather had died stealing it, and her father have also gone mad for it. Charlie, Cheuk and Ma cross paths in a party hosted by Sung in his mansion and make their intentions clear before engaging in a game of show hand to determine who will have the Koran, which Cheuk wins using trickery but dissatisfies Ma, who challenge him to a Mexican stand off and hands him his revolver. Cheuk backs off and declares the match a draw, but Charlie wants to gamble with Cheuk in game of Russian roulette with Ma's revolver and fools Cheuk when Charlie shoots himself twice safely since he have emptied the revolver, knowing Ma's habit of loading only five bullets, and Cheuk leaves after Sung steps in.