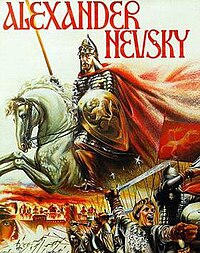 Alexander Nevsky is a 1938 historical drama film directed by Sergei Eisenstein. It depicts the attempted invasion of Novgorod in the 13th century by the Teutonic Knights of the Holy Roman Empire and their defeat by Prince Alexander, known popularly as Alexander Nevsky (1220–1263).

The Teutonic Knights invade and conquer the city of Pskov with the help of the traitor Tverdilo and massacre its population. In the face of resistance by the boyars and merchants of Novgorod (urged on by the monk Ananias), Nevsky rallies the common people of Novgorod and in a decisive Battle of the Ice, on the surface of the frozen Lake Chudskoe, they defeat the Teutonic knights. The story ends in the retaken Pskov, where the ordinary foot-soldiers are set free, the surviving Teutonic knights will be held for ransom, and Tverdilo is swarmed over by the vengeful people (and supposedly torn to pieces).