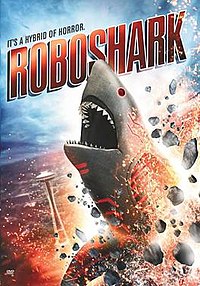 Roboshark (also released as Robo Shark vs. Navy Seals) is a 2015 Bulgarian-Canadian television film directed and co-written by Jeffery Scott Lando. Co-written and co-produced by Phillip Roth, Roboshark is a "gonzo shark film", a "tongue-in-cheek creature feature" which satirically blends action, comedy, and science fiction and which premiered at the start of SyFy Channel's second annual Sharknado week on 18 July 2015.

An alien ship approaches the Earth and launches a probe which enters the atmosphere and then splashes into the Pacific, where it is devoured by a great white shark. The shark convulses and in a few moments is transformed by the probe into a red-lined robotic simulacrum of the ocean predator. An American nuclear submarine in the area detects the robotic shark's movements and, considering it an unknown hostile entity, the captain decides to destroy it. Instead, the submarine's hull is breached by the shark's newly enhanced teeth and all hands are lost.