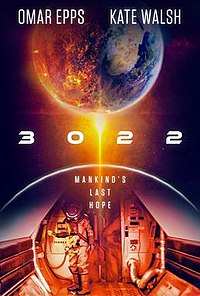 3022 is a 2019 science fiction film starring Omar Epps, Kate Walsh, Miranda Cosgrove and Angus Macfadyen. The film is set on a space station in the future. The crew suffers traumatic stress and considers abandoning their mission after they observe what they believe to be the destruction of Earth. The film is shown as a series of flashbacks and flash-forwards.