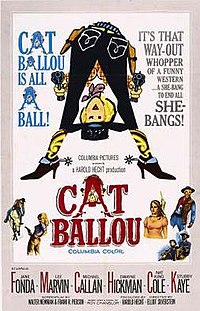 Cat Ballou is a 1965 American western comedy film starring Jane Fonda and Lee Marvin, who won an Academy Award for Best Actor for his dual role. The story involves a woman who hires a notorious gunman to protect her father's ranch, and later to avenge his murder, only to find that the gunman is not what she expected. The supporting cast features Tom Nardini, Michael Callan, Dwayne Hickman, and Nat King Cole and Stubby Kaye, who together perform the film's theme song, and who appear throughout the film in the form of travelling minstrels or troubadours as a kind of musical Greek chorus and framing device.

Catherine "Cat" Ballou, a notorious outlaw, is set to be executed in the small town of Wolf City, Wyoming. Two banjo and guitar playing "Shouters", Professor Sam the Shade and the Sunrise Kid, sing the ballad of Cat Ballou and regale the audience with the tale of how she began her career of crime.