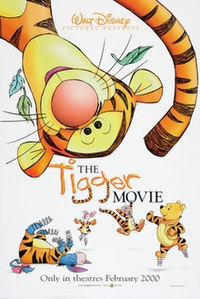 The Tigger Movie is a 2000 animated musical comedy-drama film produced by Walt Disney Television Animation with animation production by Walt Disney Animation (Japan), Inc., written and directed by Jun Falkenstein from a story by Eddie Guzelian, and released by Walt Disney Pictures on February 11, 2000. It is the second theatrical Winnie the Pooh film after The Many Adventures of Winnie the Pooh and features Pooh's friend Tigger as the main protagonist searching for his family tree and other Tiggers like himself.

Tigger interrupts the beginning of the movie, fed up with most of the stories being about Pooh. After rearranging the title page to spell out the movie's title, the story resumes. In the Hundred Acre Wood, Tigger searches for someone to bounce with him, but all of his friends are too busy preparing for the upcoming winter. Tigger's closest friend Roo wants to play with him but arrives too late to do so. While he searches for a playmate, Tigger inadvertently destroys Eeyore's house with a boulder. Rabbit gathers Pooh, Piglet, Kanga, and Roo and they build a mechanical pulley system to remove the boulder, with little success. Tigger arrives and helps out, but his actions wreck the machine and send everyone into a muddy lake (except Roo, who lands in a tree, and Eeyore, who lands in a thorn bush). Frustrated, Rabbit and the rest of Tigger's friends reprimand him for his troublesome rambunctious nature while saying that they are not like him, hurting his feelings. Roo, seeing Tigger's sadness and alienation, asks him if he has any family members of his own. Tigger is fascinated by the concept and decides to search for his family, hoping to finally be within a similar company.