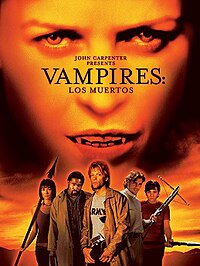 Vampires: Los Muertos is a 2002 American direct-to-video horror western film directed and written by Tommy Lee Wallace and starring Jon Bon Jovi as a vampire hunter. A sequel to the 1998 film Vampires, it was produced by John Carpenter (who directed the original film) although this film introduces new characters and the only reference to the previous film is the mention of Father Adam Guiteau from the previous film who has since died in this film as well as the legendary Béziers Cross which was unsuccessfully used in the first film to perform a ritual that enables vampires to invulnerably survive daylight. The film was followed by a sequel, Vampires: The Turning (2005).

A man on the streets searches for a prostitute, and when he finds one, threatens her with a razor blade. Derek Bliss (Jon Bon Jovi) steps in and points an odd-looking gun at his left temple. The man backs away, the prostitute thanks Derek and asks if she can do anything for him. He shoots her with three stakes, as she was a vampire. Derek drags her to an abandoned car lot and watches the body catch fire in the sunlight while filming it on camera.