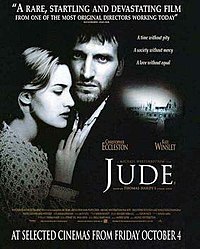 Jude is a 1996 British period drama film directed by Michael Winterbottom, and written by Hossein Amini, based on Thomas Hardy's 1895 novel Jude the Obscure. The original music score was composed by Adrian Johnston.

In the Victorian period, Jude Fawley is a bright young lower-class man who dreams of a university education. Circumstances conspire against him, and he is forced into a job as a stonemason and an unhappy marriage to a country girl, Arabella. He remains true to his dream and, months later, after his wife's sudden departure, he heads for the city. He thinks education is available for any man who is willing to work hard. However, he is rejected by the university based primarily on his lower-class status. During this period, he encounters his cousin, Sue Bridehead, who is beautiful and intelligent, and shares his disdain for convention. Whilst Jude is enraptured by Sue, and vice versa, she marries Jude's former school teacher, Phillotson, after Jude tells her he is married to Arabella.