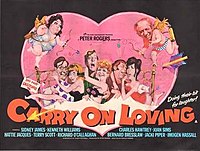 Carry On Loving is a 1970 British comedy film, the 20th release in the series of 31 Carry On films (1958–1992). It features series regulars Sid James, Kenneth Williams, Charles Hawtrey, Joan Sims, Hattie Jacques, Terry Scott and Bernard Bresslaw alongside newcomers Richard O'Callaghan (in his first Carry On) and Imogen Hassall (in her only Carry On role). The dialogue veers toward open bawdiness rather than the evasive innuendo characteristic of the earlier films in the series. There are fictitious locations named for their sexual innuendo, including 'Much-Snogging-On-The-Green', 'Rogerham Mansions' and 'Dunham Road'.