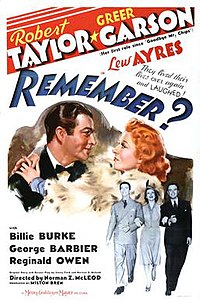 Remember? is an American romantic comedy released on December 19, 1939, directed by Norman Z. McLeod and starring Robert Taylor, Greer Garson and Lew Ayres. It was rushed into production by MGM studio chief Louis B. Mayer to capitalize on the attention and publicity generated by Greer Garson in her first film appearance, Goodbye Mr. Chips, released seven months earlier.

Following an establishing shot of the New York City skyline, an elevator in a busy office building opens and happy-go-lucky Sky Ames (Lew Ayres) steps out. In a joyful mood, singing to himself, he takes out a ring, puts it on third finger of his left hand and goes to the door marked "Eaton, Eiton, Piper & Holland Advertising Agency". Inside, Miss Wilson (Sara Haden), secretary to his best friend, Jeff Holland (Robert Taylor) tells him that Jeff is in a meeting. Showing her the ring, Sky explains that during the first vacation he took without Jeff, he met "the most wonderful girl in the world".