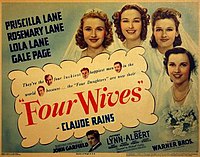 Four Wives is a 1939 American drama film starring the Lane Sisters (Priscilla Lane, Rosemary Lane, Lola Lane) and Gale Page. The film was directed by Michael Curtiz and is based on the story "Sister Act" by Fannie Hurst. It was released by Warner Bros. on December 25, 1939. The film is a sequel to Four Daughters (1938) and was followed by Four Mothers (1941).

Ann Lemp Borden (Priscilla Lane) has been recently widowed, after her husband Mickey Borden (John Garfield), a down-and-out and unlucky musical genius, is tragically killed in a car accident. She now lives at home again with her father (Claude Rains), Aunt Etta (May Robson) and younger sister Kay (Rosemary Lane). Her two other sisters, Emma and Thea, are married.