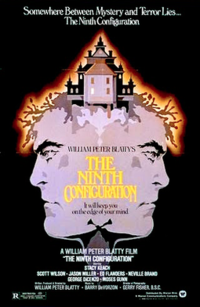 The Ninth Configuration (also known as Twinkle, Twinkle, "Killer" Kane) is a 1980 American psychological drama film written, produced and directed by William Peter Blatty, in his directorial debut. It is based on Blatty's novel The Ninth Configuration (1978), which was itself a reworking of an earlier version of the novel, first published as Twinkle, Twinkle, "Killer" Kane! in 1966. The initial 1966 publication of the novel featured an exclamation mark at the end of the title, while all subsequent publications saw it removed.

Sometime in the early 1970s, "toward the end of the War in Vietnam" as stated in the opening narration, a large castle is used by the US government as an insane asylum for military personnel. Among the many patients there is a former astronaut, Billy Cutshaw (Scott Wilson), who aborted a moon launch and was dragged screaming from the capsule, suffering from an apparent mental breakdown.