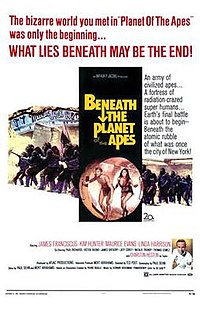 Beneath the Planet of the Apes 1970

Beneath the Planet of the Apes is a 1970 American science fiction film directed by Ted Post and written by Paul Dehn. It is the second of five films in the original Planet of the Apes series produced by Arthur P. Jacobs. The film stars James Franciscus, Kim Hunter, Maurice Evans, and Linda Harrison, and features Charlton Heston in a supporting role.

Following the events of Planet of the Apes, time-displaced astronaut Taylor and the mute Nova ride horseback through the desert of the Forbidden Zone in search of a new life far away from Ape City. Without warning, fire shoots up from the ground and deep chasms open. Confused by the strange phenomenon, Taylor investigates a cliff wall and disappears through it before Nova's eyes. The phenomenon disappears, leaving Nova alone.