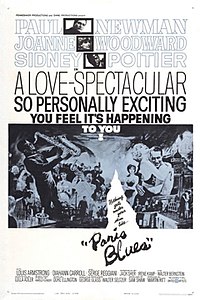 Paris Blues is a 1961 American drama film made on location in Paris, starring Sidney Poitier as expatriate jazz saxophonist Eddie Cook, and Paul Newman as trombone-playing Ram Bowen. The two men romance two vacationing American tourists, Connie Lampson (Diahann Carroll) and Lillian Corning (Joanne Woodward) respectively. The film also deals with American racism of the time contrasted with Paris's open acceptance of black people. The film was based on the 1957 novel of the same name by Harold Flender.

On his way to see Wild Man Moore (Louis Armstrong) at the train station, Ram Bowen (Paul Newman), a jazz musician living in Paris, encounters a newly arrived tourist named Connie Lampson (Diahann Carroll) and invites her to see him perform that night at Club 33. Connie isn't interested, but her friend Lillian (Joanne Woodward) insists they go see him. After Ram finishes performing with Eddie (Sidney Poitier), a fellow American expatriate, the four of them leave the club in the early morning. When Ram suggests that he and Connie go off to have a private breakfast together, she becomes offended, and Ram is angered at being rejected. However, Lillian, undeterred by Ram's attraction to her friend, convinces him to apologize before pursuing him. The two sleep together while Connie and Eddie continue to walk around Paris.