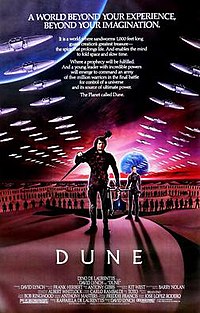 Dune is a 1984 American epic science fiction film written and directed by David Lynch and based on the 1965 Frank Herbert novel of the same name. The film stars Kyle MacLachlan (in his film debut) as young nobleman Paul Atreides, and includes an ensemble of well-known American and European actors in supporting roles. It was filmed at the Churubusco Studios in Mexico City and included a soundtrack by the rock band Toto, as well as Brian Eno.

In the far future, the known universe is ruled by Padishah Emperor Shaddam IV. The most important substance in the empire is the drug known as melange or "spice", which can extend life and expand consciousness. The most profitable and important of its properties is its ability to assist the Spacing Guild with folding space, allowing safe, instantaneous interstellar travel. The Guild fears a conspiracy that could jeopardize spice production and sends an emissary to demand an explanation from the Emperor, who confidentially shares his plans to destroy House Atreides. The popularity of Duke Leto Atreides has grown through the empire, and he is suspected to be amassing a secret army, which Emperor Shaddam sees as a potential threat to his rule. Shaddam's plan is to give House Atreides control of the planet Arrakis (also known as Dune), the only source of spice. Once they are installed on Arrakis, he intends to have them ambushed by their longtime archenemies, the Harkonnens, with assistance from the Emperor's elite troops, the Sardaukar. The Guild Navigator commands the Emperor to kill Duke Leto's son, Paul Atreides, a young man who dreams prophetic visions of his purpose. The execution order draws the attention of the Bene Gesserit sisterhood, as Paul is tied to their centuries-long breeding program to produce a superbeing, the Kwisatz Haderach. Before Paul leaves for Arrakis, he is tested by the Bene Gesserit Reverend Mother Mohiam by being forced to place his hand in a box which induces excruciating pain. To Mohiam's surprise and eventual satisfaction, he passes the test.