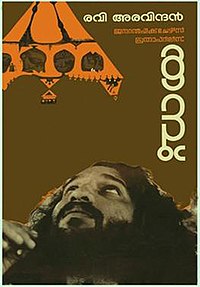 Thampu is a 1978 Malayalam-language film written and directed by G. Aravindan. Bharath Gopi, Nedumudi Venu, V. K. Sriraman, Jalaja the artistes of the Great Chitra Circus form the cast. The film deals with the roving street circus of Kerala. It is shot in black and white in a direct documentary mode.

Besides a long glittering river some men raise a pole. A tent balloons up. Where there was wide sand and the sound of water lapping, there is now a truck, chairs, hoops, stools, ropes, goats, a lioness, a pair of fat girls, some bicycles, and an old man with a philosopher's dignity, putting on white paste.