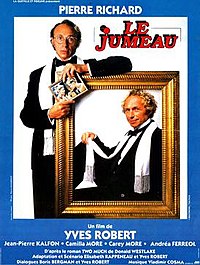 The Twin is a 1984 French comedy film directed by Yves Robert, starring Pierre Richard, Camilla More and Carey More. The film's screenplay is based on Donald Westlake's novel Two Much.

The financially troubled businessman Matthias Duval gets to know two beautiful unwed sisters. Betty and Liz Kerner are twins and they are about to inherit a fortune. But the according last will states they mustn't receive the assets unless they are married. Duval tries to solve the issue by pretending he was a twin too. He invents a twin brother and in order to make everybody believe there was a second person with his looks he creates for his imagined brother a character very different from his own. But this leads to unforeseen complications.