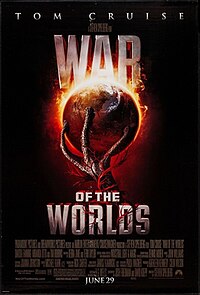 War of the Worlds is a 2005 American science fiction action film directed by Steven Spielberg and written by Josh Friedman and David Koepp, loosely based on the 1898 similarly-titled novel by H. G. Wells and jointly produced and released by Paramount Pictures and DreamWorks Pictures. It stars Tom Cruise with Dakota Fanning, Justin Chatwin, Miranda Otto, and Tim Robbins in supporting roles. It also features narration by Morgan Freeman. The film follows an American dock worker who is forced to look after his children, from whom he lives separately, as he struggles to protect them and reunite them with their mother when extraterrestrials invade the Earth and devastate cities with giant war machines. This was Gene Barry's final film before his retirement that year and his death in 2009.

The plot begins with an opening narration explaining that Earth was being observed by extraterrestrials with immense intelligence and no compassion. As man dominated the world without doubt, much in the way microorganisms swarm in a drop of water, these beings plotted to take it all from us.