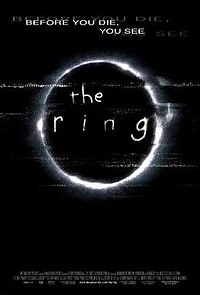 The Ring is a 2002 American supernatural horror film directed by Gore Verbinski and starring Naomi Watts, Martin Henderson, David Dorfman, Brian Cox, and Daveigh Chase. It is a remake of the 1998 Japanese horror film Ring, based on the novel of the same name by Koji Suzuki. Watts portrays a journalist who investigates a cursed videotape that seemingly kills the viewer seven days after watching it.

In Seattle, teenagers Katie Embry and Becca Kotler discuss the legend of a cursed videotape; whoever watches it dies seven days later. Katie claims she watched the tape with three friends a week ago. Minutes later, Katie is killed by an unseen force, and Becca is institutionalized after witnessing it.