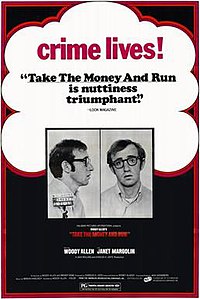 Take the Money and Run is a 1969 American mockumentary comedy film directed by Woody Allen and starring Allen and Janet Margolin. Written by Allen and Mickey Rose, the film chronicles the life of Virgil Starkwell (Woody Allen), an inept bank robber.

Virgil Starkwell's (Woody Allen) story is told in documentary style, using fake stock footage and 'interviews' with people who knew him. He begins a life of crime at a young age. As a child, Virgil is a frequent target of bullies, who snatch his glasses and stomp on them on the floor. As an adult, Virgil is inept and unlucky, and both police and judges ridicule him by stomping on Virgil's glasses.