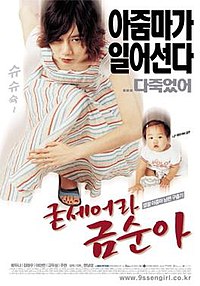 Saving My Hubby (; lit. "Be Brave, Geum-soon!") is a 2002 South Korean film starring Bae Doona, and is the directorial debut of Hyun Nam-seop.

Due to an unplanned pregnancy, twenty-something former volleyball star Geum-soon is now a married housewife with a young daughter. Her husband, Joo-tae, is starting the first day of his new job, when Geum-soon receives word that her in-laws are going to visit the following morning. While she struggles to get their house ready, Joo-tae is taken out for a drink with his new colleagues. Later that evening, Geum-soon gets a phone call from a nightclub owner who is holding her husband hostage, claiming that he has run up a huge bill and does not have the money to pay for it. Strapping her baby to her back, Geum-soon sets out to rescue her husband.