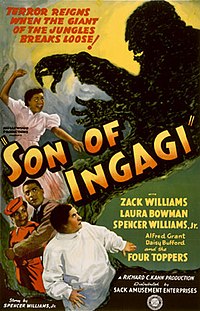 Son of Ingagi is a 1940 American monster movie directed by Richard C. Kahn. It was the first science fiction horror film to feature an all-black cast. It was written by Spencer Williams based on his own short story, House of Horror. Although the film's title appears to suggest that it is a sequel to the 1930 movie Ingagi, it is not. (The latter is an exploitation film in the guise of an ethnographic film in which purported African women are given over to gorillas as sex slaves.)

After the wedding of Eleanor and Bob Lindsay, a doctor named Helen Jackson had a discussion with Detective Nelson (Spencer Williams) and Jackson's attorney asking them to come over to her place so she can change her will. While Dr. Jackson works in her office she is approached by her brother Zeno, who insists that on Jackson's visits to Africa she must have taken gold and hidden it in her office. In response, Dr.Jackson hits a gong which calls upon the monster N'Gina, a missing link monster who she has taken from her previous trip to Africa. Jackson's brother leaves terrified. At the Lindsay's wedding, an explosion erupts, which leads most party-goers to investigate with only Eleanor staying at home. Eleanor is then visited by Dr.Jackson, who explains that she was in love with Eleanor's father and that she had fled to Africa later after he married Eleanor's mother.