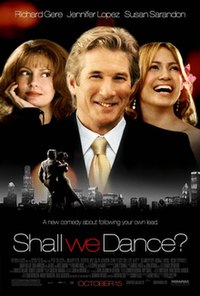 Shall We Dance? is a 2004 American romantic comedy-drama film directed by Peter Chelsom and starring Richard Gere, Jennifer Lopez, and Susan Sarandon. It is a remake of the 1996 Japanese film of the same name.

John Clark is a lawyer with a charming wife, Beverly, and a loving family, who nevertheless feels that something is missing as he makes his way every day through the city. Each evening on his commute home through Chicago, John sees a beautiful woman staring with a lost expression through the window of a dance studio. Haunted by her gaze, John impulsively jumps off the train one night, and signs up for ballroom dancing lessons, hoping to meet her.