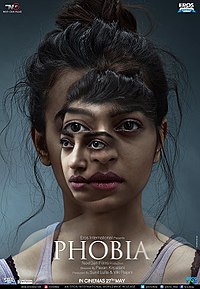 Phobia is a 2016 Indian psychological thriller film, directed by Pavan Kirpalani and produced by Viki Rajani. The film stars Radhika Apte in the leading role as Mehak, an artist suffering from severe agoraphobia. Produced jointly by Eros International and Next Gen Films, it was released on 27 May 2016.

Mehak Deo (Radhika Apte) is a highly talented artist. An unfortunate traumatic event - being molested by a taxi driver, causes her to develop extreme Agoraphobia, a condition in which the individual is paranoid about being in public places and dislikes socializing with large groups of unknown people. Mehak's sister Anusha (Nivedita Bhattacharya), initially supportive, becomes exhausted with her eccentric behavior, especially when it starts impacting her own 5-year-old son.