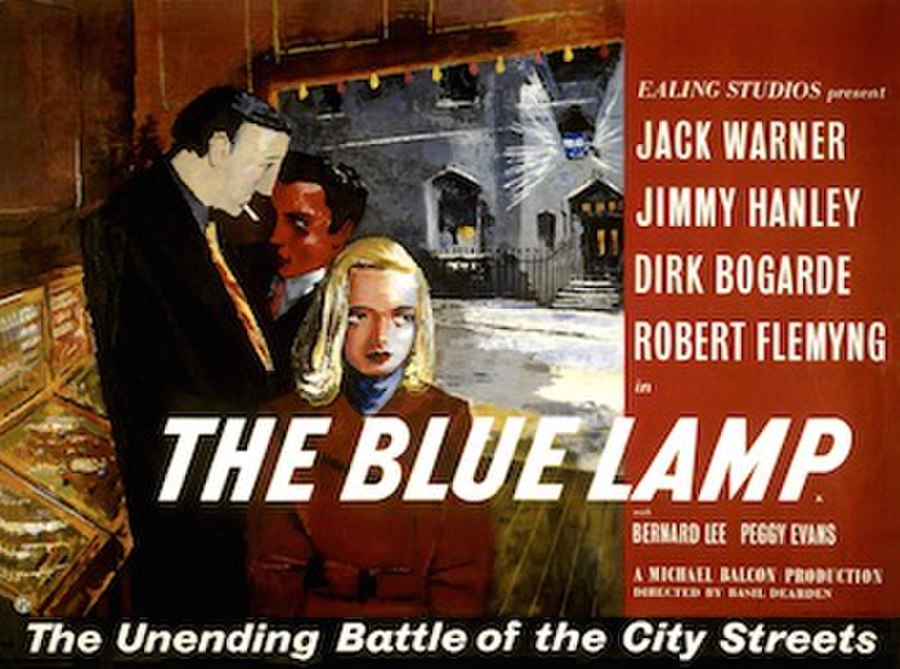 The Blue Lamp is a 1950 British police drama directed by Basil Dearden and starring Jack Warner as PC Dixon, Jimmy Hanley as newcomer PC Mitchell, and Dirk Bogarde as criminal Tom Riley. The title refers to the blue lamps that traditionally hung outside British police stations (and often still do). The film became the inspiration for the 1955–1976 TV series Dixon of Dock Green, where Jack Warner continued to play PC Dixon until he was 80 years old (even though Dixon's murder is the central plot of the original film).

The action mostly takes place in the Paddington area of London and is set in July 1949, a few years after the end of the Second World War. PC George Dixon, a long-serving traditional "copper" who is due to retire shortly, supervises a new recruit, Andy Mitchell, introducing him to the night beat. Dixon is a classic Ealing "ordinary" hero, but also anachronistic, unprepared and unable to answer the violence of Tom Riley. Called to the scene of a robbery at a local cinema, Dixon finds himself face-to-face with Riley, a desperate youth armed with a revolver. Dixon tries to talk Riley into surrendering the weapon, but Riley panics and fires. Dixon dies in hospital some hours later. Riley is caught with the help of professional criminals and dog-track bookmakers who identify the murderer as he tries to hide in the crowd at White City greyhound track in north-west London. The kudos of arresting Riley falls to young Andy Mitchell.