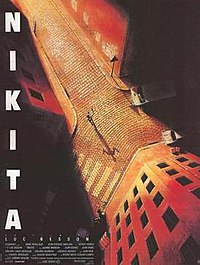 Nikita (Anne Parillaud) is a nihilistic teenage junkie who commits her life to anarchy, drugs and violence. One night, she participates in the robbery of a pharmacy owned by a friend's parents. The robbery goes awry, erupting into a gunfight with local police, during which her accomplices are killed. Suffering severe withdrawal symptoms, she murders a GIGN officer. Nikita is arrested, tried, and convicted of murder and is sentenced to life in prison.