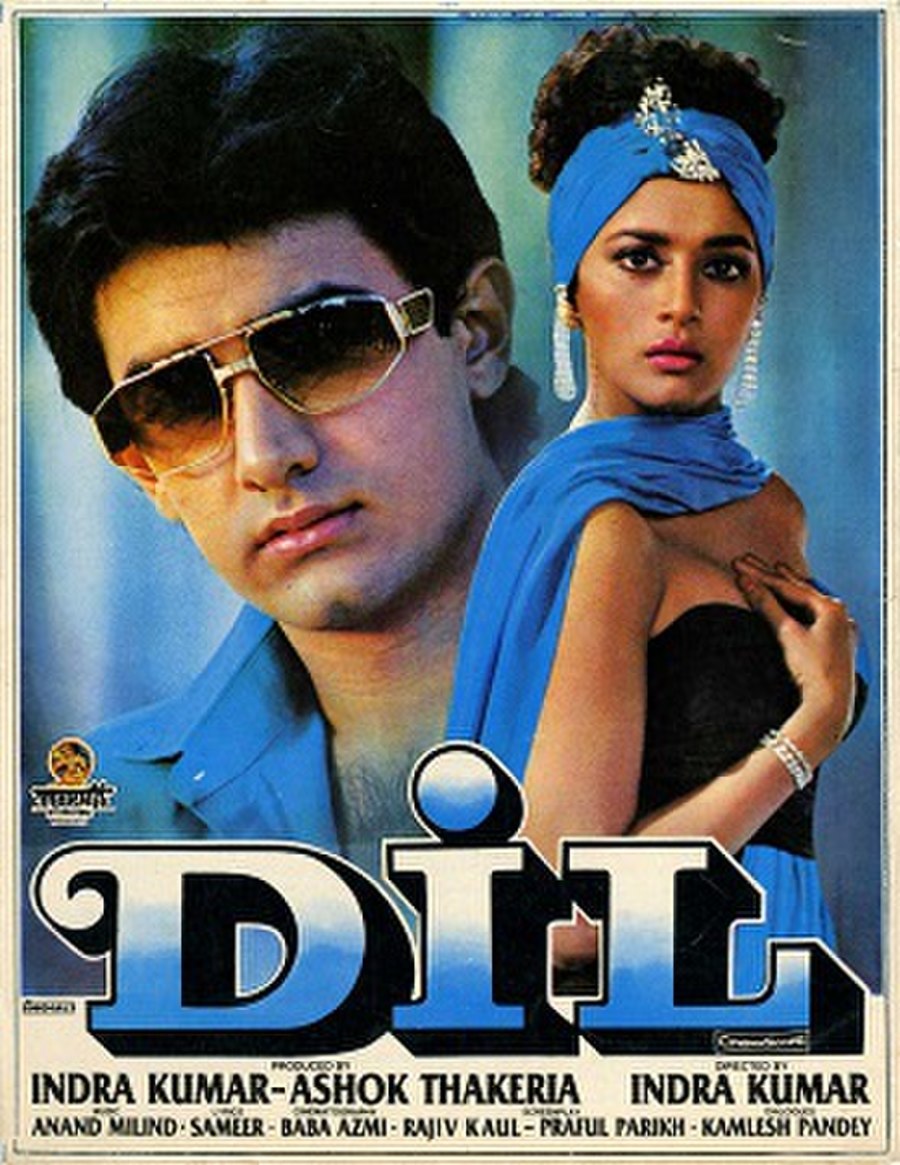 Dil is a 1990 Indian Hindi-language romantic drama film, starring Aamir Khan, Madhuri Dixit, Anupam Kher, and Saeed Jaffrey. It was directed by Indra Kumar, written by Naushir Khatau and Kamlesh Pandey, with music composed by Anand-Milind. Dixit received the Filmfare Award for Best Actress for her performance. The film was remade in Telugu in 1993 under the title Tholi Muddhu, starring Prashanth and Divya Bharti; in Odia as Agni Parikshya, starring Siddhanta Mahapatra & Anu Choudhury. It was also remade in Bangladesh in 1997 under the title Amar Ghor Amar Beheshto, directed by Sohanur Rahman Sohan, starring Shakil Khan, Popy, Ahmed Sharif and Tarik Anam Khan. The film was also remade in Kannada as Shivaranjini. The film was declared a blockbuster at the box office and the highest grosser of 1990.

Hazari Prasad, an absolute miser, dreams of finding a rich woman's marriage proposal for his son Raja, a college student and spendthrift interested in spending Hazari's money on wild parties. Raja meets Madhu Mehra, an arrogant and beautiful girl. Enraged by her, she is misled by Raja into thinking that he is blind. He mocks her when she finds out the truth, and they quickly prank on each other. Hazari looks for a bride with large dowry for Raja. He finds that his involvement in wastepaper business makes Raja a less-than-stellar marriage prospect. Accidentally, he runs into Madhu's rich father Durgesh. Hazari gives beggars large quantity of money to masquerade as wealthy acquaintances. He becomes friends with Durgesh, and they decide to get Raja and Madhu married, but when the children find the truth, they disagree to their fathers. On a weekend college retreat, Madhu falsely accuses Raja of trying to rape her. With his reputation being ruined, he reprimands her for her dishonesty and thoughtlessness, saying many take revenge but he is different. Madhu instantly falls for Raja who now develops love for her too. Durgesh discovers Hazari's true circumstances and insults and strikes him, who takes offense. Raja and Madhu are forbidden by them to see each other again. Nevertheless, Raja and Madhu secretly meet. When Durgesh finds this, he pays thugs to beat Raja and decides to send Madhu away where she will unable to contact Raja. However, Raja sneaks into the Mehra house and marries Madhu. Durgesh banishes Madhu from the house. Hazari also disowns Raja, who moves into a small shack with Madhu and works as a constructionist. Despite their poverty, they live happily until Raja is hurt at construction site. Madhu leaves to beg Hazari for money to pay an emergency operation. He agrees, only if she divorces Raja. Hazari removes her wedding necklace. Madhu returns to Durgesh and is forgiven but he orders her to never see Raja. When Raja recovers, Hazari lies that Madhu never visited him at the hospital. Believing Madhu deserted, Raja returns to his home. His mother Savitri reveals to him that Madhu was blackmailed by Hazari. Raja rushes to stop Madhu from taking a plane to London but is late as it takes off. Luckily, she didn't take the plane and meets him. They reunite and everyone live happily, as Hazari and Durgesh repent for their deeds.