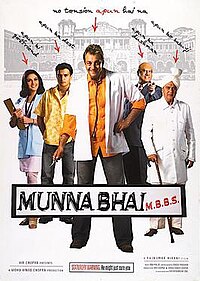 Murli Prasad Sharma, nicknamed Munna Bhai ( Brother Munna), is a bhai or goon: a good-natured don in the Mumbai underworld. Given that his father had wished him to be a medical doctor, he creates the faux Sri Hari Prasad Sharma Charitable Hospital, named after his father, and pretends to live in accordance with this wish whenever his father and mother visit him in Mumbai.