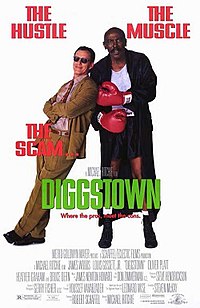 Gabriel Caine (James Woods), a con man, is released from prison in Winfield, Georgia and immediately gets to work on his next scam. Caine and his partner, Fitz (Oliver Platt), travel to a small town not far from the prison: Diggstown, a city obsessed with boxing.