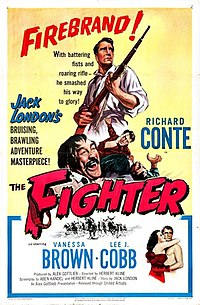 The Fighter is a 1952 American film noir boxing film based on the 1911 short story "The Mexican" by Jack London. The film is directed by Herbert Kline and produced by Alex Gottlieb. Kline and Aben Kandel wrote the adapted screenplay. The film was released by United Artists in the United States on , 1952.

A boxer, in Mexico, sets out to avenge the murder of his family by using the money from his winnings to purchase weapons.