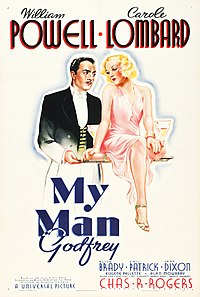 My Man Godfrey is a 1936 American screwball comedy film directed by Gregory La Cava and starring William Powell and Carole Lombard, who had been briefly married years before appearing together in the film. The screenplay for My Man Godfrey was written by Morrie Ryskind, with uncredited contributions by La Cava, based on 1101 Park Avenue, a short novel by Eric S. Hatch. The story concerns a socialite who hires a derelict to be her family's butler, and then falls in love with him.

During the Great Depression, Godfrey "Smith" Parke is living with other men down on their luck at a New York City dump in a Hooverville on the East River near the 59th Street Bridge. One night, a spoiled socialite named Cornelia Bullock offers him $5 to be her "forgotten man" for a scavenger hunt. Annoyed, he advances on her, causing her to retreat and fall on a pile of ashes. She leaves in a fury, much to the glee of her younger sister and rival, Irene. After talking with Irene, Godfrey finds her to be kind, though a bit scatter-brained. He offers to go with her to help her beat Cornelia.