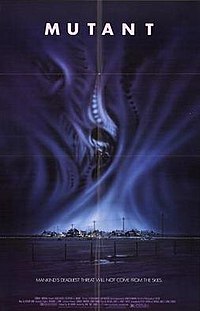 Mutant is a 1984 American horror film. It was initially released to theaters as Night Shadows, but it premiered on video with the Mutant title, which it has retained for all subsequent releases.

Brothers Josh and Mike are run off the road by local rednecks and forced to spend the night in a small town whose inhabitants are suffering from a mysterious disease. When Mike goes missing, Josh has to team up with the sheriff to defeat the mutating townsfolk.