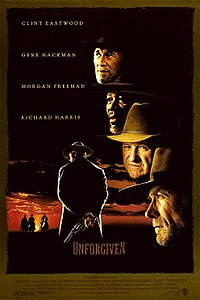 Unforgiven is a 1992 American Revisionist Western film starring, directed, and produced by Clint Eastwood, and written by David Webb Peoples. The film tells the story of William Munny, an aging outlaw and killer who takes on one more job, years after he had turned to farming. The film co-stars Gene Hackman, Morgan Freeman, and Richard Harris.

In 1881, in Big Whiskey, Wyoming, a cowboy—Quick Mike—slashes prostitute Delilah Fitzgerald's face with a knife, permanently disfiguring her, after she laughs at Quick Mike's small penis. As punishment, local sheriff "Little Bill" Daggett orders Mike and his associate who was with him at the brothel, David "Davey" Bunting, to turn over several of their horses to her employer, Skinny DuBois, for his loss of revenue. Outraged, the prostitutes offer a $1,000 bounty for the cowboys' deaths.