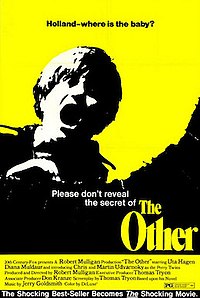 The Other is a 1972 American psychological thriller film directed by Robert Mulligan, adapted for film by Thomas Tryon from his 1971 novel of the same name. It stars Uta Hagen, Diana Muldaur, and twins Chris and Martin Udvarnoky, with Victor French, John Ritter, and Jenny Sullivan in supporting roles.

In the summer of 1935, identical twins Holland and Niles Perry enjoy playing on their family farm. Earlier in the year the boys' father died in an accident in the apple cellar, leaving their mother deeply melancholic and agoraphobic. Instead the farm is looked after by their father's brother George and his wife Vee, along with their bratty son Russell. Also residing nearby are the twins' pregnant older sister Torrie, her new husband Rider, and their Russian emigrant grandmother Ada, with whom Niles shares an especially close relationship. Ada has taught Niles to astrally project his mind into the bodies of other living creatures, an ability that runs in the Perry family; they refer to this as "the great game."