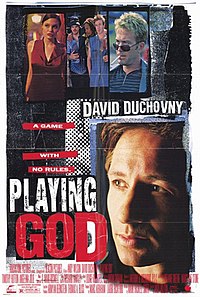 Playing God is a 1997 American dramatic crime thriller film directed by Andy Wilson and written by Mark Haskell Smith. It stars David Duchovny (in his first starring role after achieving success with The X-Files), Timothy Hutton, and Angelina Jolie.

Duchovny plays Eugene Sands, a surgeon who has his medical license revoked after operating under the influence of amphetamines and opiates. Hutton's character, a crime lord named Raymond Blossom, happens upon him in a bar where Sands saves someone's life with an emergency procedure to inflate a collapsed lung. Blossom hires Sands as his personal physician, patching up his accomplices when they cannot go to a hospital, and tending to the crime boss and his girlfriend, Claire (Jolie). In the final act of the film, Claire and Sands become involved, and he must face up to conflicting loyalties to Blossom, Claire, and the FBI agent who has blackmailed him into being an informant.