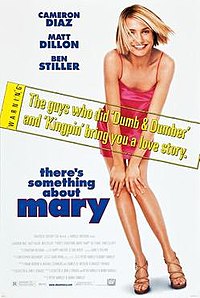 There's Something About Mary 1998

There's Something About Mary is a 1998 American comedy film directed by Peter Farrelly and Bobby Farrelly. It stars Cameron Diaz as the title character with Ben Stiller, Matt Dillon, Lee Evans and Chris Elliott all playing men who are in love with Mary and vying for her affections.

In 1985, 16-year-old high school student Theodore "Ted" Stroehmann is about to go on a prom date with his dream girl Mary Jensen when he gets his scrotum stuck in a zipper. He is hospitalized when it bleeds after being unzipped, which cancels their date. Ted subsequently loses contact with Mary.