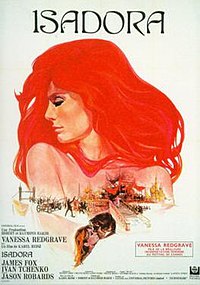 Isadora (also known as The Loves of Isadora) is a 1968 biographical drama film directed by Karel Reisz from a screenplay written by Melvyn Bragg, Margaret Drabble, and Clive Exton adapted from the books My Life by Isadora Duncan and Isadora, an Intimate Portrait by Sewell Stokes. The film follows the life of American pionering modern contemporary dance artist and choreographer Isodora Duncan, who performed to great acclaim throughout the US and Europe during the 19th century. A co-production between the United Kingdom and France, it stars Vanessa Redgrave as Duncan and also features James Fox, Jason Robards, and John Fraser in supporting roles.

In 1927, Isadora Duncan has become a legend as the innovator of modern dance, a temperamental bohemian, and an outspoken advocate of free love. Now past 40, she lives in poverty in a small hotel on the French Riviera with her companion Mary Estelle Dempsey/Mary Desti (named only as Mary in the film) and her secretary Roger, to whom she is dictating her memoirs. As a young girl in California, Isadora first demonstrates her disdain for accepted social standards by burning her parents' marriage certificate and pledging her dedication to the pursuit of art and beauty. In 1896, she performs under the name of Peppy Dora in a rowdy music hall in Chicago and publicly embarrasses the theatre manager into paying her $300 so that she can take her family to England. Modelling her free-form style of dance and costume after Greek classicism, she rapidly acquires international acclaim.