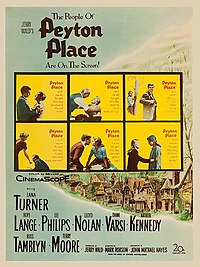 In the New England town of Peyton Place, drunkard Lucas Cross stumbles out of his house, just as his stepson Paul, fed up with his alcoholism, leaves town. Lucas's downtrodden wife, Nellie, works as housekeeper for Constance "Connie" MacKenzie, the owner of a local clothing shop. The daughters of both families, Allison MacKenzie and Selena Cross, are best friends and will soon graduate high school. While the MacKenzies live a privileged life, the Cross family is indigent. At Peyton Place High School, a newcomer, Michael Rossi, is hired to be the new principal by school board president Leslie Harrington; the students' choice for the position is long-time teacher Elsie Thornton. Rossi wins over Ms. Thornton by offering to work with her.